Well – I guess the first post says it mostly. I have the domain name, so I decide it’s time to start contributing to the conversation somehow. In the end, I don’t know what this will become. Hope you enjoy the journey with me.

As for the title, “Grounded”, it refers to a song that always makes me think of what I should be striving for as I try to walk as a man of God.Â  It’s by the Orange County Supertones, a Christian, hip-hop reggie band from the late 90s (and into the 2000s) that seemed to be the real deal.Â  The first time I went to the Creation festival they performed and I don’t think I’ve been a part of anything like it since – with the exception of a David Crowder concert – but that’s a whole different deal.

I think the reason “Grounded” speaks to my heart is two-fold.Â  First, it calls me to stand up and fight like a man.Â  And of course that gets me going.Â  I assume it’s talking about the real-deal, ride ’em cowboy kind of man.Â  Come in on the white horse, kill the bad guys, have my wife swoon over me and my amazing physique.Â  You know, the stuff movies are made of.Â  (Yes I know, this sounds like a typical John Eldridge book).Â Â  But is has nothing to do with that.Â  Instead I’ve come to realize the more that I grow that it’s much more about living a life of integrity, digging deep into the Word of God and leading my family with utmost honor, respect and love!Â  (Good thing too, because I don’t have that physique thing going for me anyway)Â  To do that, I have to learn the real art of fighting like a man.Â  I have to be grounded.Â  I have to have the Scripture in hand.Â  The truth is I fail at it to often – but that shouldn’t stop me from trying again.

Second it calls me to be a man of thought and intellect.Â  The names in the last verse of the song, if you’re not familiar with them, are great scholars of the 20th century… men that knew how to reason the Word of God in the light of an anti-Christian world view that surrounded them. I hate to say “I want to be like them” – because I’m not sure God’s given me their specific gifts.Â  But I “want to be like them” – a man like them – that digs deep into the Truths of the God.Â  There are 10s or 100s or examples around us – but we have to make a decision to make the move and the sacrifice so that our lives reflect Christ.Â  That’s a man of God as best I can tell.Â  At least, that’s what I’m heading toward (albeit slowly from all of the stumbling I do). 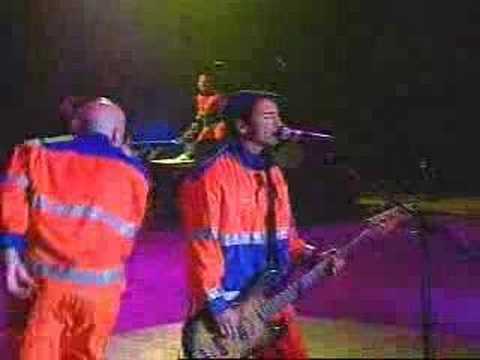 I strike back like the empire
and we’ll televise the revolution.
What will save you
From divine retribution?
Do our part, try to make a contribution
Playin’ at 11, givin’ OC noise pollution.
Think long and hard
about our world today…
what needs to be said,
and what I need to say.
We’re a tower of Babel
built on anti-philosophy,
Neitzche in the west
and Krishna in the east.

War rages on through generations.
All of these Christians
abandoned their stations.
A whole world around us,
and we’ve ceased to reach.
An army of soldiers,
we’ve neglected to teach.
But, it’s dim and not pitch black.
The truth will prevail.
If our God is for us, how can we fail?
No surer hope has ever been bested.
But for our adversary’s worthy,
prepare to be tested.

Hoo, Hah.
How will you stand
if you don’t understand?

Hoo, Hah.
Fight like a man, scriptures in hand.

And here we stand
naked, barehanded futily prepared
for the blows to be landed.
Presuppositions is all you can stand on.
Can you twist their wrist
when they lay a hand on?
Learn how to fight
from words on a paper.
learn from the shoguns,
Bahnsen and Schaeffer.
Invincible army,
Holy Spirit our general.
Weapons are formed
form most precious of minerals.

Kids in universities,
drowning in an ocean
of apostate philosophy.
We need apologetic instruction…
mental reconstruction.
Ignorance reduction,
to halt the mass abduction.
Evangelical mind
has been scandalized.
Wisdom and truth
have been vandalized,
by the unevangelized.
No truth in a world
that is randomized.
Expose the lies
no matter how they’re disguised.